I placed an order on July 26. Website said I would receive them within 5-7 business days. I called on August 6th and a few times after that as well. I kept being promised a call back, as every time I called there was an excuse as to why they couldnt tell me a status. System down, update, etc... I didn't receive a call back or my product. I also felt they spoke to me as if I was bothering them for inquiring an update. Later in August I called back for the last time and said this was unacceptable. They did "upgrade" one set she said so that they could send them out. Claiming the reason they hadn't been mailed was because they weren't in stock now. I received a notification on August 18th saying BOTH sets had shipped. I only received 1 set. I sent an email on August 27th stating if they still could not fulfill their obligation by Sept 4th I expected a refund. On September 2nd they responded saying they would credit my card. A more important fact, they also changed their sheets. They are NOT the same product, just same name.... look at online reviews. I wish I would have.
These are just the facts. Its up to you if you want to go through all this for sheets.

They. Feel. Marvelous! So smooth and soft after only one wash.

The blue on the website does not match the sheets we received. They were a light purple

B
Degree 5 Bamboo Sheet Set B.H.
Still have not received all of my order

And no updates I have called 2 Times they keep telling me back ordered.
I am the one who initiated to check on the rest of my order. No updates
I would give a better review, but I should have at least been told about the back order when I received the other set.

I will never order from Dreamfit again. Ordered ivory sheets which website said was in stock. After weeks of not hearing anything I called. Was told sheets were in production and they would be shipped Friday. More weeks went by. I called again. Was told they were out of stock. We’re you ever going to communicate this to me if I hadn’t called or just keep my money? I settled for white sheets. Sheets are fine, but your customer service is terrible.

My husband is very particular when it comes to the sheets he sleeps on. He has commented on the lovely blue color and the texture of the sheets. All in the positive.

This recent purchase, the sheets were Very thin and low quality from the previous awesome quality Dream Fit sheets that I purchased 2 years ago.

These sheets are wonderful! A lot of people complained that they were not soft. My wife and I personally don’t like a really soft sheet. We like a crisp and clean sheet. These are exactly that. The fit is great and quality even better! Will definitely purchase these again. Love them!!!

I returned them, they were delivered yesterday & waiting for a refund to my account.

I am disappointed in all the extra material , they need to fit tight 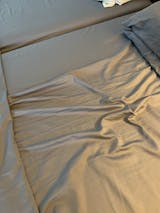 I have received prompt responses to my issue of non-delivery. Also, the one set of sheets that I did order (the degree 1 microfiber sheets are quite soft. I love the tabs to allow them to fit on my bed without slipping. They make everything so much easier!

Odd that I would receive a request to write a verified review when I have not received the product due to problems on their end and have have a hard time getting responses from the company. In short, after *three* attempts to contact the company about this issue, the response was “computers have been down”—for over a week—and the product was placed on back order (although I hadn’t previously been told). I ordered 2 sheet sets, one arrived in a timely way, but the product mentioned above did not arrive, and I did not receive communication that there was an issue fulfilling this portion of the order. I wasn’t told when the order was processed that the product was on back order; nor was I informed when half the order was shipped that part of the order was on back order. It took 2 emails and a phone call to discover that one of the items I ordered was on back order AND that their computers were down, so I couldn’t get further details. (I’m not clear if it is their office computers or their server where their database is likely stored that is down…in my experience, it’s possible to access servers from other locations…). Anyway, I want to be understanding, but the lack of information and customer service engagement has been sorely missing…as has been mentioned in other reviews…I expect to cancel the backordered item given the lack of clarity on what to expect.

P
Degree 4 Egyptian Cotton Sheet Set P.B.
My Dream Sheets, not so much.

The sheets were delivered very quickly. When opened, they were very soft, silky and beautiful. When I washed, they turned dull and just like any other set of sheets I've purchased for less money. They have a kind of rough touch. However I do like the depth of the sheets for bed making and they fit perfectly.
In my opinion, they are not worth the $199.00 I paid; Calfornia King size. They aren't bad but not what is described on the commercial. I am looking for a very soft feel and thought these would be it. I don't hate them, but I don't love them either. They didn't give us that 'dream' sleep as advertised. Their just ok..

First sheets I have found that fit the mattress and don’t slide off.

DreamFit sheets are the best sheets I've ever bought.

The resolution to the problem was taken care speedily. Very happy.